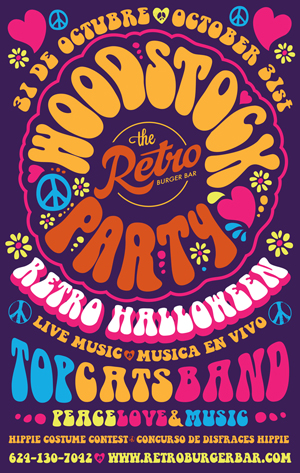 This year, Retro Burger Bar will be hosting its 1st Annual Woodstock Party on Halloween! The band will play authentic covers from Led Zepplin to Creedence Clearwater Revival to Queen to Jimmy Hendrix everything 70’s!

Patrons will need to come dressed up with their “Bell Bottom Pants” and big-collared shirts just as if they were going back in time to the Woodstock era. This fun, live entertainment evening will be full of surprises including a variety of promotions on food and drink.

The Woodstock Music & Art Fair—informally, the Woodstock Festival or simply Woodstock—was a music festival billed as “An Aquarian Exposition: 3 Days of Peace & Music”. It was held at Max Yasgur’s 600-acre dairy farm in the Catskills near the hamlet of White Lake in the town of Bethel, New York, from August 15 to August 18, 1969. Bethel, in Sullivan County is 43 miles (69 km) southwest of the town of Woodstock, New York.

During the sometimes rainy weekend, 32 acts performed outdoors in front of 400,000 concert-goers. It is widely regarded as a pivotal moment in popular music history. Rolling Stones listed it as one of the 50 Moments That Changed the History of Rock and Roll.

So, come and join us at Retro Burger Bar after the sun sets and all through the night listening, dancing and singing your way to heaven as a homage to the early 70’s Woodstock era!